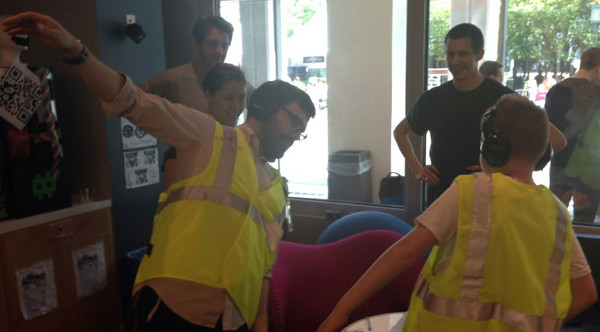 One Minute to Impact: A physical game where two players must compete using only their hearing and reflexes to win the game!

Inspired by the parachute scene in the James Bond movie Moonraker, One Minute to Impact was developed as the final assignment for a custom game controler class, Beyond the Joystick. Each player listens closely for a beacon noise so that they can fly towards your opponent, then once the battle cue music starts, tug on their parachute strap to steal or defend the parachute. Whoever has the parachute at the end of the one minute fall is the winner! The game was designed and built by a team of five and shown at the 2013 New York Come Out & Play Festival.